The last few months have been a really great time to be in the construction business in Besançon. I’ve already complained about them cutting down the beautiful plantanes on Quai Vieil Picard, turning Place Flore into a giant sand box and making my morning commute to Planoise a daily adventure. But the latest conflagration has been the destruction of Pont Battant, which I believe was built right after WWII. Although the actual bridge is not very old, the location has a right history. Based on geological findings, it’s fairly certain that there has been a bridge there since the days of Vesontio, the Roman town upon whose foundations the modern city of Besançon is built. Pont Battant is certainly the most well-known for the four main bridges which connect the boucle (the city center which is encircled by the River Doubs on three sides and the Citadelle on the fourth) to the other side of the river.

The bridge is important enough that they can’t just knock it down without first creating a temporary substitute. They have been working on said substitute, a passerelle (pedestrian bridge), for the last few weeks. The week before my departure they finished the installation of the passerelle, although when I passed on Tuesday afternoon (April 24) it was still not open. It was cool to see how they did it (using a crane placed on the existing bridge to lower the huge iron pylons they had welded together into the river and then welding them together once they were in place). Crossing the bridge is currently a big pain, not just because the walkway has been reduced to practically a single lane to leave the construction workers, cranes, etc the maximum amount of space, but because people frequently stop to watch the construction. Here are some pictures I took right before they installed the final section of the passerelle: 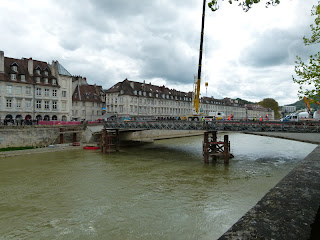 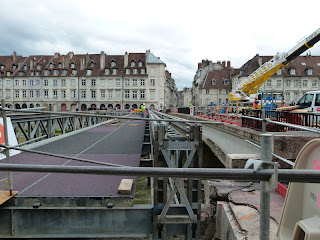 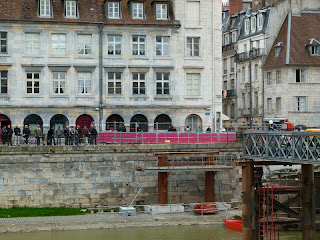